No telling where latest sell-off will ultimately end 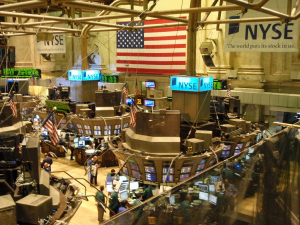 “Irrational exuberance” was the phrase famously used by then Federal Reserve chairman Alan Greenspan in a speech during the dot.com bubble of the 1990s.
The phrase was interpreted as a warning that stock markets might be overvalued. The global stock market sell-off this month has raised the old fears again.
The fault lines this time probably do not lie with technology stocks but fear is gripping stock markets in general nonetheless, and the overvaluation issue in bonds markets for sure is turning into something of a dirty word.

It may be that for some time it will be hard to find any asset class for your investments. The market is just selling everything.
The U-turn has all to do with interest rates and their rock-bottom levels. We know about quantitative easing and the vast printing of money that central banks have engaged in around the world since the crash. They have flooded the financial system with lots of cheap money and driven down yields to historic lows.
At the start of the year, the Irish 10-year bond yield was no higher than 0.5%. Last week, the Government’s cost of borrowing for 10 years has more than doubled, to 1.1%.
advertisement

To put that in perspective, if you bought €1m of the Irish 10-year bond a month ago, you would be down €60,000 if you cashed it in today. That may not seem a lot, but imagine the amount of bonds on some of these big bank balance sheets and you start to get an insight into the huge exposures and risks.
Markets turned a blind eye to the risk of rising interest rates because inflation was benign and central banks were still printing money to suppress rates from rising.
The elephant in the room for financial markets has always been the risk of interest rate increases. Exiting out of the bond market would be like trying to empty the Aviva Stadium through one toilet door.
Central banks raise interest rates as a brake on inflation, and cut rates when the economy needs a stimulant. There have been many false starts when we thought inflation was rising.
Something has evidently changed. Most market rallies tend to end in hyper-buying and last month we witnessed such behaviour in the stock markets and also in crypto currencies, like Bitcoin.
Market professionals, time after time, get sucked into believing that there will be no end to a market rally and there was plenty of evidence of this type of thinking in recent months too. Yet, one only needs a small event to stampede the herd.

How deep this bear market will go is not predictable.

However, we know that when deleveraging starts it tends to take some time. Confidence is damaged and there is little appetite to ratchet up risk again soon. Investors will not be buying Government bonds in Europe at below yields of 1% again — that is for sure. There are some other nasty risks out there which are also worrying. The world’s big capitalised companies that were offered cheap money in the flooded debt markets caused by central banks’ bond-buying programmes, also known as quantitative easing or QE, used that money to buy back their own shares. Interestingly, medium-cap stocks were not offered the oodles of cheap cash, so they are better placed to benefit from prudent management and good growth prospects.
It is not all bad news. As an investor, you just need to know where to look.

Peter Brown is director of Baggot Investment Partners, and head of education at IIFT.ie, which offers free
investment seminars